All of my paintings have a story. Nothing comes from thin air.

“Snow White as Rosie the Riveter” came about in Sep 2014 when I was in Disney world with my sisters. We visited the dreamland of our childhoods, as adults, and saw everything in a whole new light.

For starters, we discovered #HiddenMickey !

But we also joked about how Disney ruined our lives (sarcasm!) because the movies set such unrealistic expectations of what being a woman would mean for us, how easy it would be to talk to birds and squirrels, and best of all… who is Prince charming?!

We had been discussing the use of the Rosie the Riveter image, and I suppose since I was sleeping in a bed with a Disney princess headboard, which played music and set off digital firework when you pressed a button, I dreamed of Princesses.

Don’t get me wrong, I wanted to be every one of the princesses when I was little. I wore dresses like theirs and knew the words to all the songs they sang, and I LOVE them in spite of their flaws.

Of all the Disney Princesses, Snow White did the least for me, because she was so helpless and dainty.

When I got back home to Chicago, I started sketching a concept until it evolved into this idea of Snow White as Rosie the Riveter. 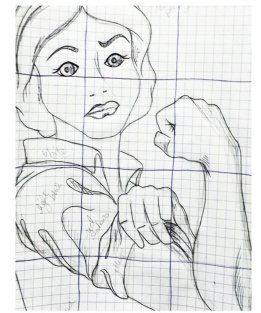 I wanted to re-create her as a woman who took charge, instead of waiting for prince charming to rescue her.
I posted updates as I painted, and I asked my Instagram followers and friends if they thought I should add a bird, to make her more like Snow White, and they said Yes!

So she evolved.
From my childhood, from my brain, and from the influence of others.
And I was so happy with her and the message she sent, I set myself on a mission to create a series around the Disney Princesses. 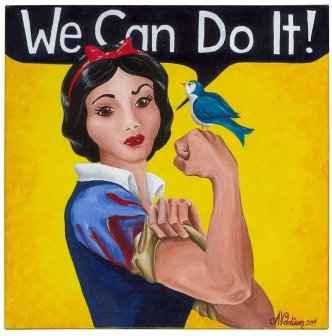 The “Women of Influence” series is a series of paintings that began with this one image. Look through my gallery for also Princess Jasmine as Amelia Earhart, and Cinderella is Ruth Bader Ginsberg.

Also, there is a hidden mickey in this painting 🙂

Items printed with the image can be found in my etsy shop!